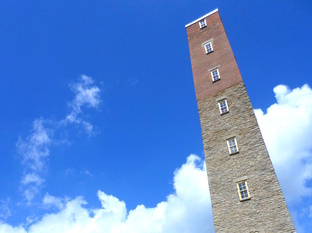 A true survivor of frontier days, Dubuque's Shot Tower stands starkly against the river front as a unique memorial to the early munitions industry.

During the Civil War, the tower produced three tons of musket shot per day, under conditions that would amuse modern industry.

The first story contained a steam engine used to hoist the lead by windlass to the tower top. The center of the chamber contained a large tub of water to catch and cool the shot. By climbing ladders, the munitions markers reached a furnace on the ninth floor. Here, the lead was melted, 120 feet above the ground.

To make the shot, the hot lead was poured through a succession of screens arranged at various heights in the tower. Taken from the tub of water, it was polished, sorted and graded for size. The imperfect shot would be carried to the top and re-melted.

However, after being built in 1856, the tower was only used briefly before being bought up by a competitor shot maker from St. Louis. After the war, the adjacent Standard Lumber company used it as a fire lookout for its lumber mills.  In 1911, a series of fires destroyed the local lumber industry and the tower's wooden interior was set ablaze by an arsonist. (No arrests were ever made.)

In 1976, the shot tower was added to the National Register of Historic Places. Renovations soon followed. In 1992, a CHicago, Central and Pacific Railroad car jumped the tracks and hit the tower, causing between $5,000 and $10,000 in damage. The city considered relocating the tower to a safer location, but ultimately decided against it. A half million dollar major renovation project was undertaken starting in 2003 and 2004, paid for by a combination of city funds and state and federal grants. The renovations included correcting structural problems, constructing a new, non-combustible stairway, replacing windows, and other improvements to the structure. The renovations were completed by 2013.